Blog from the West Coast 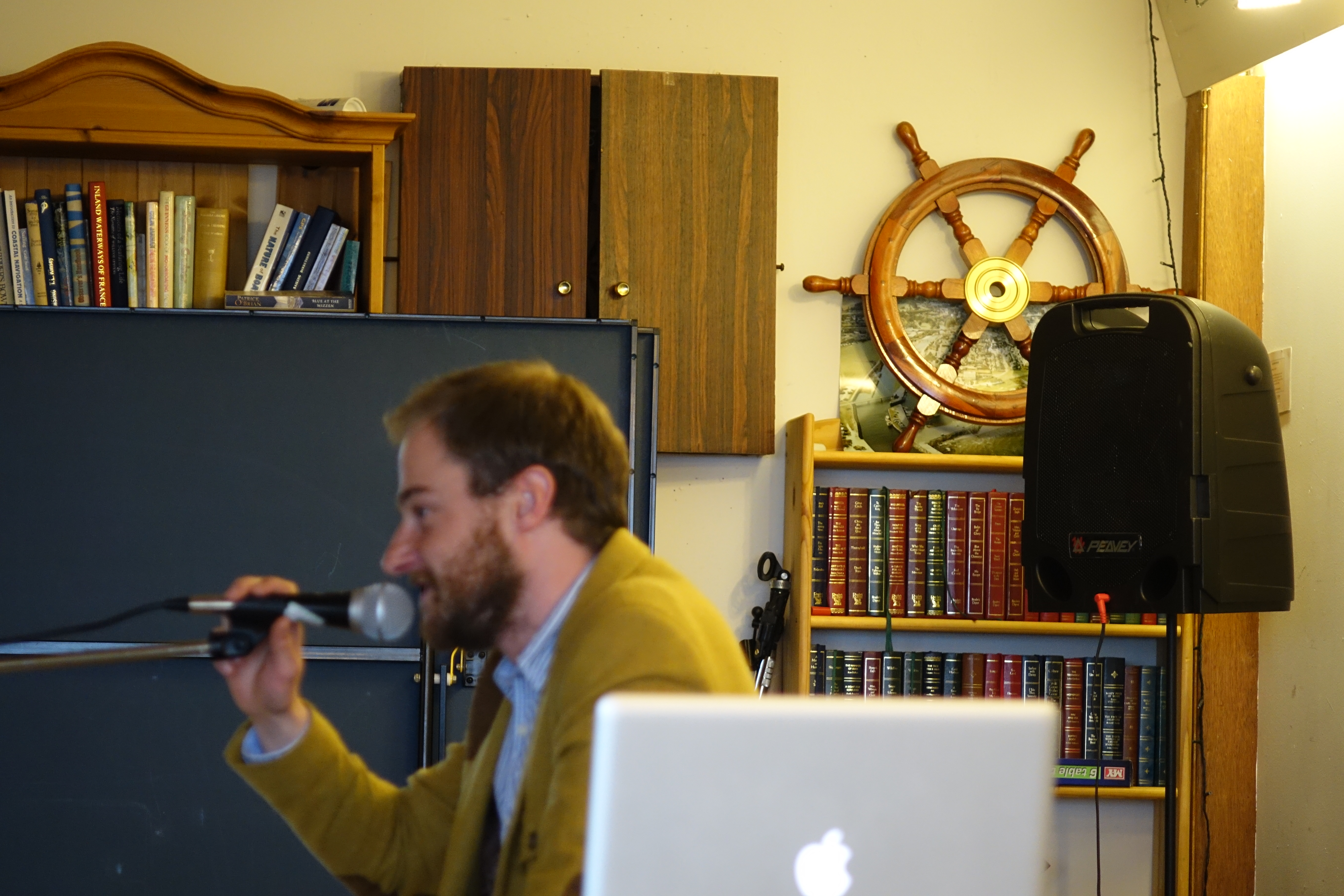 Blog from the West Coast

Last summer Mike frightened all of his friends and family by spending several weeks comatose in hospital, struck down by a very rare form of Lyme’s Disease which caused meningitis and encephalitis. Whilst he was recovering in his hospital bed he was given a copy of Neil Gunn’s non-fiction account ‘Off in a Boat’ to read. Mike has a lifelong love of sailing and was so inspired by this book that he decided that once he was well again he would recreate Gunn’s original trip to inspire his own composing. So we spent the month of May sailing this epic voyage. And as project manager, I thought I should at least get to come too (even though I’ve hardly done any sailing in my life and am definitely prone to seasickness).

The route was planned around the locations visited by Gunn as described in his book: Duntulm, Skye; Portnalong, Skye; Eigg; Arisaig; Tobermory; Bunessan; Iona; Oban; Kentallen; Fort William; and finally travelling up the Caledonian Canal to Inverness and eventually reaching Nairn for a homecoming celebration. The aim was for Mike to perform a series of concerts in the various ports, absorb the inspiring beauty of the west coast, and come home to write a new album to be toured in October. We’ve had a huge amount of interest and positive feedback about the project so far and support from Enterprise Music Scotland, Creative Scotland, Calmac Ferries and House of Lochar who originally published the book.

Our first stop was Skye, where NG bought his boat, The Thistle. One of the joys of this trip is that different guest musicians are joining Mike for each concert, so we arrived at Portree with harpist Jennifer Port and her husband Graeme. The guest musicians meant that each local concert was a one-off, flavoured by the place and the people performing with him. Mike spent a few weeks in the School of Scottish Studies Archives in preparation for the performances, looking for music local to each area he was to visit, transcribing them and arranging them to give something unique to each performance. You can read about that here. The Skye visit was characterised by transport logistics – it’s not simple to get about Skye if you don’t have a car, and changing weather conditions meant we had to have contingency plans in place and public transport identified. Fortunately a few very kind people were able to give lifts and be generally brilliant. Us inexperienced sailors were also all severely seasick on the first voyage and I honestly thought I wouldn’t make the month if things were going to be like that. Luckily things got better.

Guitarist/flautist Sean Gray and piper Angus Binnie met us in Eigg for concert number two. We were also joined for the first time by a couple of film-makers who are making a documentary about the trip. We’d had some lovely sailing by that point and had probably anticipated some kind of sleepy island watching the ferry come in and out and diligently shutting down for the Sabbath. Suffice to say Eigg folk are pretty wild, and anyone who has the privilege of being a guest on that island is in for an exciting time of it. By this time we were 7 of us (Mike had quite the entourage and the boat itself was skippered by his dad David) and it felt pretty crowded on the short crossing from Eigg to Arisaig. The numbers swelled again as Tia Files and Eilidh Shaw also joined the performance team for a mega line-up for the lucky Astley Hall audience that evening.

We were selling copies of Off in a Boat and had sold out of books in Arisaig. Fortunately the publishers had diligently sent the last of their stock to the Iona Post Office for us, and got some reprinted in time for the next gig in Duror (the closest hall to Kentallen). It’s amazing how taken people are by the book, actually. It’s selling much better than any of the CDs!

Each concert has been coloured by something different. Eigg and Arisaig will always remain in my memory beautiful sunny places full of mad and welcoming people. Mull and Iona are mysterious lands picked out in drizzle, mist, and gales. Guitarist/fiddler Innes Watson joined us in Tobermory for the trip round to Iona. He didn’t get the smoothest of sailing experiences but he did get to play in the gorgeous acoustics of Iona Abbey. Iona was such a different experience from the likes of Eigg, but the hospitality was excellent and the audiences enthusiastic. Read more about it here.

Halfway through our stay in Oban, Mike delivered a workshop for Fèis Latharna and their Ceilidh Trail musicians. The Ceilidh Trail is a brilliant initiative which takes place all over Scotland. Young musicians are given a summer job performing as a band around the local area, earning a fee and learning about what it’s like to be a touring musician. These guys are still working up their sets, but we invited them to perform a support slot at the next concert which would give them some performance experience before the big tour. It was a great experience for everyone and they were brilliant.

We decided to stay in Oban that day rather than sail to Kentallen, and got lifts to the concert instead. Mike was joined by Scots singer Fiona Hunter  and whistle player/pianist Hamish Napier. The audience at Kentallen and Duror was brilliant. We had arranged the concert ourselves via a hall hire, which is always a risk and we honestly didn’t know if anyone was going to turn up. Luckily we had an enthusiastic hall committee on our side and they worked hard to invite people. We were told ‘nobody’s heard of Mike Vass but they love the concept’. Connie, our main contact, told me that they never get touring acts of that standard coming to play at the hall so it was a great novelty. They seemed to really enjoy themselves and were keen for a return visit. Hopefully we can make that happen!

Hamish joined the crew at Oban and we set out up Loch Linnhe towards the Caledonian Canal. He immediately instated Songs in the Cockpit (coming ready prepared with folders full of lyric sheets – suspiciously organised for a musician) and even wrote a couple of tunes during the voyage. You can hear his tune for the boat, Windsong, towards the end of this video.

The flavour of the voyage changed drastically when we hit Corpach. Suddenly we had moved away from salt water and were into the realms of locks, motoring, and not being able to use the sea toilet (fine for the guys, not so fine for one needing toilet paper). We made it up into the canal, paid our fees (offset by a bit of sponsorship from Scottish Canals – thanks guys!) and moored overnight, waiting for locking up at 8.30 the next morning when we would be taken through Neptune’s Staircase. I celebrated shore power by slow-cooking a bolognese on the electric hob. The boys not so pleased about the long wait for dinner.

It took us 3 1/2 hours to get up the series of locks from Corpach that makes up Neptune’s Staircase. I got to become very familiar with the different types of slime on the lock walls, and Hamish and Mike were particularly adept at standingaroundholdingropes. They made some friends along the way, a French couple heading to Norway with further plans to head across the Atlantic to the Caribbean. They keep a cartoon blog about it here. The canal itself was nothing like my expectations. Stunning mountains (Ben Nevis and friends) at the start, then huge lochs (Lochy and Ness) and tree-lined stretches that felt more like rivers than canal.

The boat lives in Nairn where Mike is from, so after an overnight stay in the Seaport Marina in Inverness, we completed our last set of locks and found ourselves back on salt water in the Moray Firth. I’d forgotten what sailing was like after just a few days of peaceful motoring through the canal! We saw our first dolphin too. It played at the bow for a bit before disappearing as we headed under the Kessock Bridge. The wind wasn’t with us that day and we mostly motored, but as we approached Nairn the sun decided to come out and the wind blew in the right direction to allow us to do the last little bit under sail.

It was odd to be back on dry land right enough. We had a few days to recover and then the final homecoming concert at Nairn Sailing Club. This was a real community affair with members of the Nairn Fèis (who Mike recently wrote a 10th anniversary tune for) and the Sailing Club who have known him since he was a boy. He was joined on stage by the last of his guest musicians – none other but the Skipper himself David Vass. It was a great ending to an epic voyage.

Now Mike is back in Glasgow about to start writing the album that will be based on the voyage. Take a look at the blog and follow for updates about the album and tour www.inthewakeofneilgunn.com.